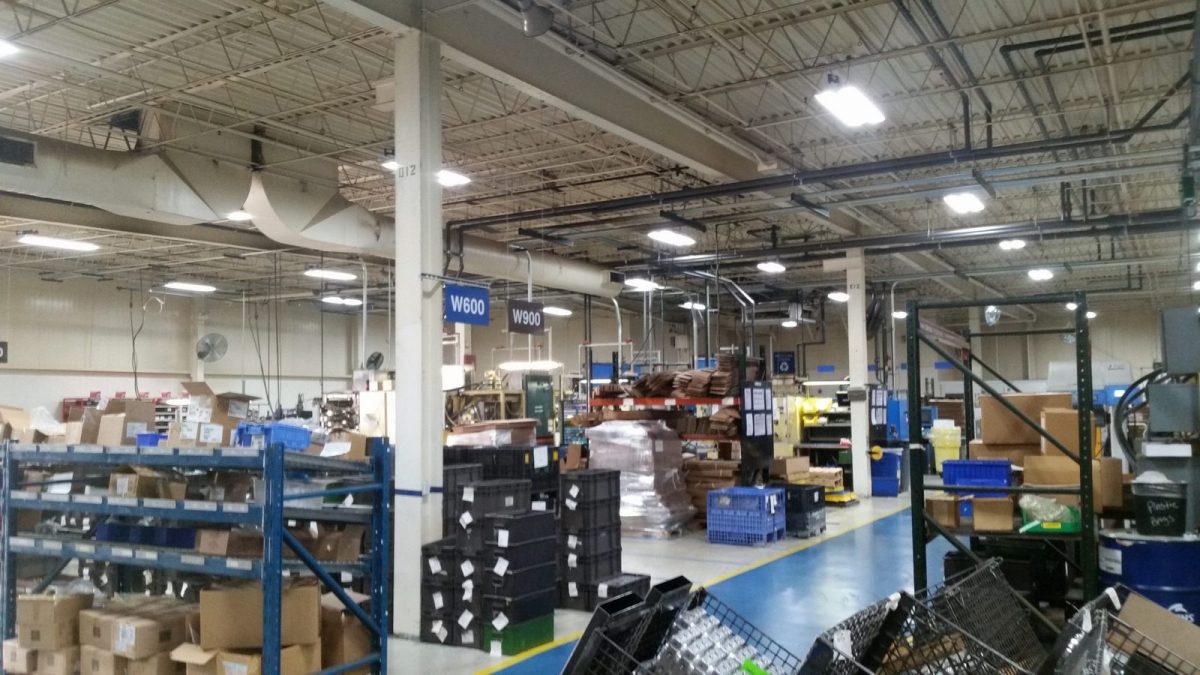 The lighting at Concentric AB’s manufacturing facility in Rockford, IL was similar to many other large spaces – either too bright or too dark, and certainly too expensive to power and maintain. Switching to a LED solution from SLS not only improved employees’ work environment, it saved the company close to $9k per month in energy and maintenance costs.

Concentric AB is one of the world’s leading pump manufacturers. Its Rockford, IL facility manufactures an array of hydraulic pumps and motors. The 20-acre campus, including the 125,000 square foot hydraulic plant, was built in 1964 and was undergoing a facelift. Manufacturing Engineer and Facility Manager Martin Moesgaard explained that most of the lighting was fluorescent and dated. Employees disliked it so much they often unscrewed the bulbs near their work spaces due to the glare on their computer screens.

“I called Sustainable Lighting Solutions to look into switching our fluorescent lighting over to LED,” Moesgaard says. SLS developed a plan that included sensors to save additional energy costs, and offered to install pilot light fixtures for the company to review before signing off on the full project. Once the new lighting was in place, employees responded immediately.

“Over the years, people just unscrewed the fluorescents. They didn’t like the glare on their computers. When the new lights were piloted, the engineers responded positively to the new fixtures and the even distribution of the light. They were asking to have the project done quickly” Moesgaard said.

Concentric employs 177 people at its Rockford campus, where the manufacturing plant runs in three shifts. Moesgaard was concerned about finding an optimal time for the installation, without causing disruption to operations, as well as how the new fixtures would fit into the building’s 1964 drop-down ceiling architecture.

“Overall the installation went smooth. They were always on top of the communication, and they were very flexible in working around our schedule,” Moesgaard says. “SLS came in on the second shift. They also installed some new parts within drop ceilings to make the retrofit easier and aesthetically appear more pleasing.”

One of the most pleasant surprises of the project, Moesgaard says, was learning about the significant rebates that SLS could secure to fund part of the project. All businesses and consumers pay into the state’s energy efficiency program fund every month, which funds ComEd’s Smart Ideas program. Moesgaard had previously completed the Smart Ideas application for an air compressor rebate, and found the process time consuming. He was pleased that SLS handled all of the paperwork for the rebate, which came to $73,000.

“SLS managing that process was a big plus,” Moesgaard said. “And I really liked knowing that I was getting my money back from that fund, for the benefit of my company.”

Currently, Concentric is on track to save on average 750 kilowatt hours annually, which accounts for 1/8 of its energy consumption.

“Overall, we have been very pleased,” says Moesgaard. “People say their eyes aren’t as tired or strained as before, and I’m happy that we’re getting some of our money back!”

When SLS piloted some fixtures, people immediately realized how bad the existing lighting was. We couldn’t get the project done quick enough.